The process of oil painting – part 2 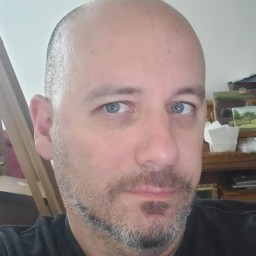 Give me your name and email address and I will help you to make improvements in your oil painting faster than you ever thought possible. I will start by send you inspiring video lessons, tutorials, tips and motivational material - free.

This is a continuation of the article, how was that oil painting made part 1.

I was in the middle of showing you the overall process of oil painting using a portrait by John Singer Sargent.

This may be general, but up to this point, the same processes are repeated only more carefully. Edges are not left as diffused and become more finalized. Small drawing corrections are made and the features of the girl and the dog features begin to get indicated. Take not that I did not say finished, they are only indicated here.

The main areas of light and shadow are more established, like on the red sash and the shadow area on the girl’s face.

In Sargent’s process of oil painting he was always “preparing” his painting for those final strokes. The final strokes are like his handwriting. They make the painting unique to him.

The art student has the problem of trying to put in these final strokes first and working everything else ( all the other stages done up to this point ) around those final strokes in the process.

Ok, so now it’s time. He has done his preparation well. His foundation, the part which really “holds up” the painting was done. Time to start getting into the details now.

Time to make final decisions and get more into the real drawing part now. Outlines are sharpened even more. Light areas on the hair are established. Features can begin to be concentrated on because the main large shape of the face has been established. In other words, the foundation for the features was set.

Note, that having a good background in drawing helps immensely here.

In the last stages all the detail is worked out.

All of the things most people will notice and admire first (the fur on the dog, the wetness of the lips, the whites of the girl’s eyes, etc.) are all added now.Yes he would take a lot of time getting these details right. But, he could give them his full concentration.

This is only possible because he spent so much time on his preparation. His main masses that hold the painting together.

The process is one of putting the details on top of the main masses. You keep putting paint on the canvas correcting and adding more detail. Only when Sargent had the large masses just the way he wanted them could he concentrate on the details. The eyes of the girl could have his full attention.

Sargent knew that the main masses were correct and would not have to worry about them. He could concentrate on only the details he was working on.

Eventually, following this simple “repeating process” your painting gets to a point that you are happy with. This would include the amount of detail, color accents, etc. and you call it complete.

My 7 Video Instruction Series called Oil Painting Formula covers the entire process in great detail by pulling back the curtain for you as far as techniques, processes, and all those secrets you want to know.